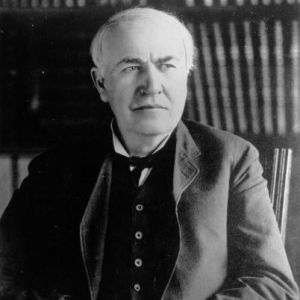 It is extremely difficult to find anyone living today who has not been affected in some way by Thomas Edison.  Most people on Earth have seen some kind of motion picture or heard some kind of sound recording.  And almost everyone has at least seen an electric light.

These are only three of the many devices Thomas Edison invented or helped to improve.  People living in this century have had easier and more enjoyable lives because of his inventions.

Thomas Alva Edison was born on February eleventh, eighteen forty-seven in the small town of Milan, Ohio.  He was the youngest of seven children.

Thomas Edison was self-taught.  He went to school for only three months.  His teacher thought he could not learn because he had a mental problem.  But young Tom Edison could learn.  He learned from books and he experimented.

At the age of ten, he built his own chemical laboratory.  He experimented with chemicals and electricity.  He built a telegraph machine and quickly learned to send and receive telegraph messages.  At the time, sending electric signals over wires was the fastest method of sending information long distances.  At the age of sixteen, he went to work as a telegraph operator.

He later worked in many different places.  He continued to experiment with electricity. When he was twenty-one, he sent the United States government the documents needed to request the legal protection for his first invention.  The government gave him his first patent on an electric device he called an Electrographic Vote Recorder.  It used electricity to count votes in an election.

In the summer months of eighteen sixty-nine, the Western Union Telegraph Company asked Thomas Edison to improve a device that was used to send financial information.  It was called a stock printer. Mr. Edison very quickly made great improvements in the device.  The company paid him forty thousand dollars for his effort.  That was a lot of money for the time.

This large amount of money permitted Mr. Edison to start his own company.  He announced that the company would improve existing telegraph devices and work on new inventions.

Mr. Edison told friends that his new company would invent a minor device every ten days and produce what he called a “big trick” about every six months.  He also proposed that his company would make inventions to order.  He said that if someone needed a device to do some kind of work, just ask and it would be invented.

Within a few weeks Thomas Edison and his employees were working on more than forty different projects.  They were either new inventions or would lead to improvements in other devices.  Very quickly he was asking the United States government for patents to protect more than one hundred devices or inventions each year.  He was an extremely busy man.  But then Thomas Edison was always very busy.

He almost never slept more than four or five hours a night.  He usually worked eighteen hours each day because he enjoyed what he was doing.  He believed no one really needed much sleep.  He once said that anyone could learn to go without sleep.

Thomas Edison did not enjoy taking to reporters.  He thought it was a waste of time.  However, he did talk to a reporter in nineteen seventeen.  He was seventy years old at the time and still working on new devices and inventions.

The reporter asked Mr. Edison which of his many inventions he enjoyed the most.  He answered quickly, the phonograph.  He said the phonograph was really the most interesting.  He also said it took longer to develop a machine to reproduce sound than any other of his inventions.

Thomas Edison told the reporter that he had listened to many thousands of recordings.  He especially liked music by Brahms, Verdi and Beethoven.  He also liked popular music.

Many of the recordings that Thomas Edison listened to in nineteen seventeen can still be enjoyed today.  His invention makes it possible for people around the world to enjoy the same recorded sound.

The reporter also asked Thomas Edison what was the hardest invention to develop.  He answered quickly again — the electric light.  He said that it was the most difficult and the most important.

Before the electric light was invented, light was provided in most homes and buildings by oil or natural gas.  Both caused many fires each year.  Neither one produced much light.

An electric light passes electricity through material called a filament or wire.  The electricity makes the filament burn and produce light.  Thomas Edison and his employees worked for many months to find the right material to act as the filament.

Time after time a new filament would produce light for a few moments and then burn up.  At last Mr. Edison found that a carbon fiber produced light and lasted a long time without burning up.  The electric light worked.

At first, people thought the electric light was extremely interesting but had no value.  Homes and businesses did not have electricity.  There was no need for it.

Mr. Edison started a company that provided electricity for electric lights for a small price each month.  The small company grew slowly at first.  Then it expanded rapidly.  His company was the beginning of the electric power industry.

Thomas Edison also was responsible for the very beginnings of the movie industry.  While he did not invent the idea of the motion picture, he greatly improved the process.  He also invented the modern motion picture film.

When motion pictures first were shown in the late eighteen  hundreds, people came to see movies of almost anything — a ship, people walking on the street, new automobiles.  But in time, these moving pictures were no longer interesting.

In nineteen-oh-three, an employee of Thomas Edison’s motion picture company produced a movie with a story.  It was called “The Great Train Robbery.”  It told a simple story of a group of western criminals who steal money from a train.  Later they are killed by a group of police in a gun fight.  The movie was extremely popular.  “The Great Train Robbery” started the huge motion picture industry.

Thomas Alva Edison is remembered most for the electric light, his phonograph and his work with motion pictures.  However, he also invented several devices that greatly improved the telephone.  He improved several kinds of machines called generators that produced electricity.  He improved batteries that hold electricity.  He worked on many different kinds of electric motors including those for electric trains.

In nineteen thirteen, a popular magazine at the time called Thomas Edison the most useful man in America.  In nineteen twenty-eight, he received a special medal of honor from the Congress of the United States.

Thomas Edison died on January sixth, nineteen thirty-one.  In the months before his death he was still working very hard.  He had asked the government for legal protection for his last invention.  It was patent number one thousand ninety-three.