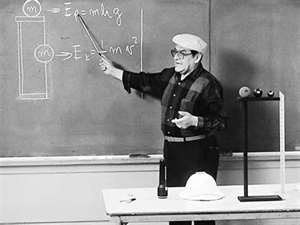 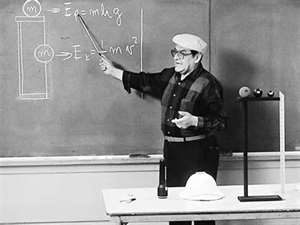 Jaime Alfonso Escalante was born in 1930 in La Paz, Bolivia. Both his parents were teachers. He taught math and science in his home country for twelve years.

In the 1960s, Jaime Escalante and his wife Fabiola came to the United States. During the next several years, he learned to speak English and repeated his college education and teacher training.

In 1974, Mr. Escalante was hired at Garfield High School to teach mathematics.

The school was in a poor area of Los Angeles, California. Many of the students had serious problems with illegal drugs, gangs and violence. The school was in danger of losing its official approval to operate.

Mr. Escalante’s students were mostly Mexican-Americans from a Spanish-speaking area of the city. Many were the worst students at the school and thought to be “unteachable.” But Mr. Escalante pushed the group to work hard. He told them basic math was too easy and that they had the ability to do harder work.

He told his students that he believed in them, but they must have the desire to be successful.

Jaime Escalante started an advanced math program with a small group of students. Advanced Placement is a program of college-level classes and tests. In 1982, eighteen of his students took the Advanced Placement test in calculus. They all passed.

Officials at the testing company suspected the students of cheating. Mr. Escalante protested. He said the students were being rejected because they were Hispanic and from a poor school. He urged his students to take the test again.

Twelve of the students repeated the test. And again, all of them passed.  Five earned top scores. Mr. Escalante’s students went on to become engineers, scientists and university professors. The advanced math program at Garfield became extremely successful over the next several years.

Jaime Escalante received many teaching awards including the Presidential Medal of Excellence in Education. A movie about his success, “Stand and Deliver,” was released in 1988. It influenced other teachers to use his methods.