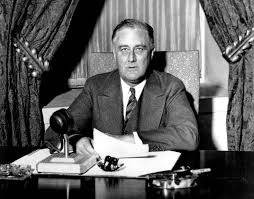 Franklin Delano Roosevelt was one of the most influential presidents in American history. He was elected president four times. He served more than twelve years, longer than any other president. He led the nation through its worst economic crisis, and through one of its worst wars.

Franklin Roosevelt was first elected president in nineteen thirty-two. As the Democratic candidate, he defeated President Herbert Hoover. Americans were suffering through a terrible economic depression. About twenty-five percent of American workers had lost their jobs. They had no money. They had no hope. They waited in long lines to receive free food.

Americans did not know if the new president could end the economic crisis.

The new president, Franklin Roosevelt, was fifty-one years old. His family name was well known to the American public. Theodore Roosevelt, a distant relation, had been president of the United States thirty years before.

Franklin Delano Roosevelt was born in eighteen eighty-two to a rich and important family in Hyde Park, New York. He was the only child of James and Sara Roosevelt. His mother tried to control Franklin’s life as long as she lived. His father made sure his son had the best of everything. But he also taught Franklin that being rich brought with it the responsibility of helping people who were not so lucky.

Franklin married Eleanor Roosevelt in nineteen-oh-five. They were distant relations. In the next eleven years, they had six children.

In nineteen ten, Mr. Roosevelt was elected to the New York state legislature. He showed he had great political skills as a state senator. His next job was in the federal government as assistant secretary of the navy under President Woodrow Wilson. Then in nineteen twenty, he was the Democratic Party’s unsuccessful candidate for vice president.

In nineteen twenty-one, Franklin Roosevelt suffered a personal tragedy. He was with his family at their summer home. He began feeling very tired. Then he felt severe pain in his back and legs. He could not move. For weeks, he was forced to lie on his back.

His doctors discovered that he was a victim of the disabling disease polio. He lost the use of his legs. Franklin Roosevelt was thirty-nine years old. He had always been an active man who loved sports. But now he would never walk again without help.

Many Americans thought the sickness would end Franklin Roosevelt’s political dreams. But they were wrong. He showed an inner strength that people respected. He was elected governor of New York State in nineteen twenty-eight and re-elected two years later. Franklin Roosevelt always appeared strong and friendly in public. He loved to laugh and enjoy life. But his friendly face hid a strong will. Throughout his life, Mr. Roosevelt worked hard to improve life for the common man. He believed government had the power and responsibility to improve the lives of its citizens.

That music, “Happy Days Are Here Again,” was played during Franklin Roosevelt’s presidential campaign in nineteen thirty-two. A large majority of voters decided that maybe he could make that song come true. On Inauguration Day in nineteen thirty-three, the nation waited to hear what the new president would say about the economic future of their country. This is what he said:

FRANKLIN ROOSEVELT: “This great nation will endure as it has endured, will revive and will prosper. So, first of all, let me assert my firm belief that the only thing we have to fear is fear itself.”

President Roosevelt promised to end the Depression. He promised to put Americans back to work. He said the federal government would take an active part in creating jobs. During the next three months, he led Congress in passing more major new programs than the nation had seen for many years. President Roosevelt called his reform program “The New Deal.”

These are some of the programs created during this time: A National Recovery Administration allowed companies to cooperate to increase production. A Works Progress Administration provided jobs for unemployed workers. A Civilian Conservation Corps put young men to work protecting the nation’s natural resources. The Tennessee Valley Authority built dams, cleared rivers, expanded forests and provided electricity in the southeastern part of the country.

In nineteen thirty-five, Congress passed two laws that would change the lives of working Americans for years to come. The National Labor Relations Act strengthened the rights of workers and gave more power to labor unions. The Social Security Act created a federal system to provide money for workers after they retired.

Franklin Roosevelt became one of the most loved and most hated presidents in the history of the country. The majority of Americans believed he was trying to save the country and protect common people. Opponents charged he was giving the federal government too much power and destroying private businesses.

Franklin Roosevelt tried to establish a close relationship with the American people. He became known by the first letters of his full name — FDR. He talked to the American people by radio to explain what actions were being taken and what he planned for the future. These radio broadcasts helped him gain widespread support for his programs.

President Roosevelt ran for re-election in nineteen thirty-six. He defeated the Republican candidate Alfred Landon by one of the largest majorities in the nation’s history.

In the late nineteen thirties, another crisis was growing more serious every day. Adolf Hitler and his Nazi party in Germany threatened central Europe. Japanese forces carried out new aggression in Asia and the Pacific area. FDR warned Americans that a victory by these forces would threaten democracy everywhere in the world.

FDR was re-elected in nineteen forty. He was the only president to win a third term in the White House. On December seventh, nineteen forty-one, Japanese planes attacked the American naval base at Pearl Harbor, Hawaii. The United States was forced to enter the war. President Roosevelt cooperated closely with British Prime Minister Winston Churchill in the war effort. He discussed war efforts with Soviet Premier Joseph Stalin.

FDR was re-elected president for the fourth time in nineteen forty-four. Most Americans believed the country should not change its leader in the middle of a war. When he was sworn in, President Roosevelt’s speech lasted only six minutes. He declared that America had learned “that we cannot live alone at peace, that our own well-being is dependent on the well-being of nations far away.”

President Roosevelt did not live to see the victory of the Allies and the end of World War Two. He died less than three months later, on April twelfth, nineteen forty-five, in Warm Springs, Georgia.

Winston Churchill wrote about the day he heard the news of the death of his close friend: “I felt as if I had been struck with a physical blow. My relations with this shining man had played so large a part in the long, terrible years we had worked together. Now that had come to an end. And I was overpowered by a sense of deep and permanent loss.” Millions of people around the world joined Winston Churchill in mourning the death of America’s thirty-second president, Franklin Delano Roosevelt.