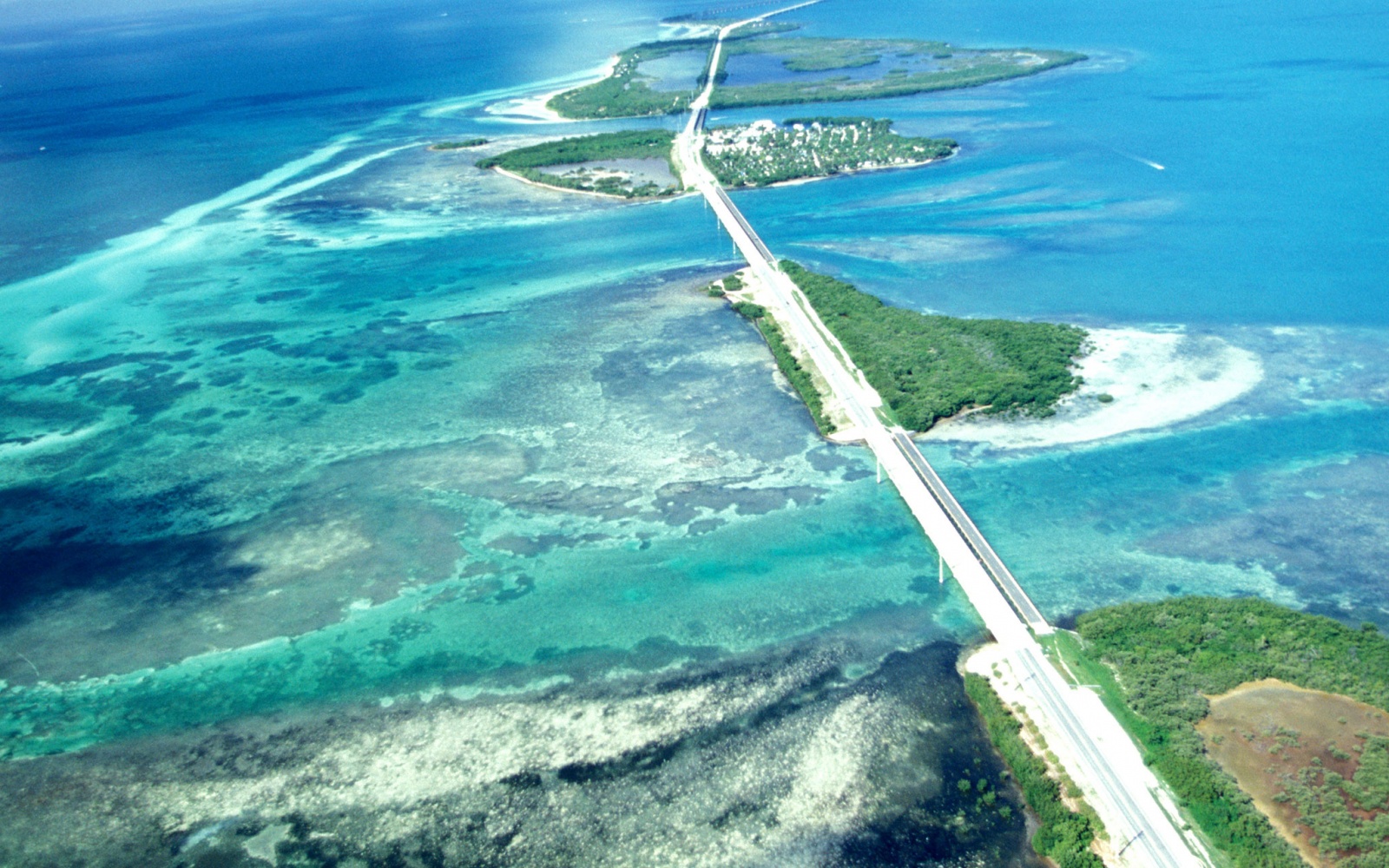 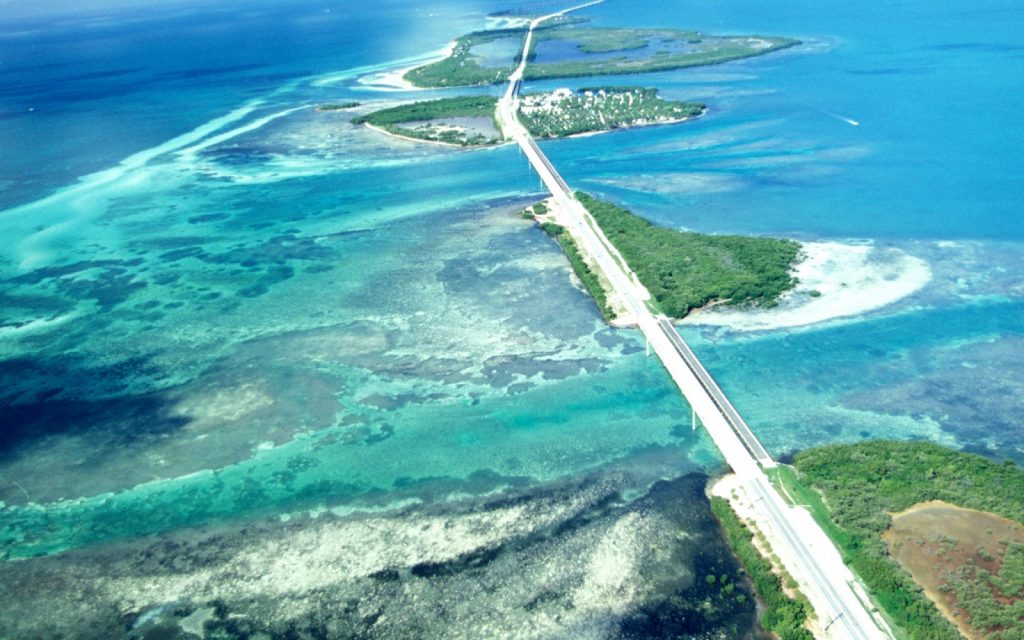 The first European to see the Florida Keys was Spanish explorer Ponce de Leon in the year 1513. He was searching for special water that would keep people young forever. But he did not find that special water, or any other water that people could drink.  Later, other Spanish explorers mapped the area as an aid to help their treasure ships return to Spain.

Many of the Keys still have Spanish names, like Islamorada, Bahia Honda and Key Vaca.  The word “Keys” comes from the Spanish word “cayos” meaning “little island.”  And many of the Florida Keys are little.  Hundreds of the islands are only pieces of sand that extend a few feet out of the water.  Many are only visited by sea birds.

Yet some of the Keys are big enough to support large numbers of people.  One of the most popular is Key West.  It is the farthest south of the Keys that can be reached by car.

A road extends southwest into the Florida Keys.  It is called Highway One.  It starts into the Keys from the state of Florida at a bridge that crosses the water to the island of Key Largo.

The road is narrow and the traffic is often slow as it travels through each of the small towns of the Keys.  Highway One is about 157 kilometers from Key Largo to its end in Key West.  It extends across many bridges between the islands.  The longest of these bridges is 11 kilometers long.  It is called Seven Mile Bridge and was completed in 1911.  At the time, it was considered one of the wonders of the world.  No bridge crossed as much open water.

It was a strong bridge, too. Seven Mile Bridge survived many storms, including one huge ocean storm that damaged the Keys in 1935. The first Seven Mile Bridge was replaced in 1982, but you can still see the old bridge, close to the new one.Today, the Florida Keys are a popular holiday area.  Many of the islands have beautiful white sand beaches.  Swimming and boating are major sports.  Visitors can pay to go on a boat for a fishing trip. They can catch many different kinds of fish including huge fish called sailfish or marlin.  People come from all over the world to fish in the Florida Keys.  In fact, the people who live on Islamorada Key claim their island is the “Sports Fishing Capital of the World.”

However, the people of other Keys say the fishing is just as good off their islands.

Visitors can ride on other kinds of boats in the Florida Keys.  Some are special party boats.  These go out for the day or during the night. There are food and drinks on these boats. They might also have bands or recorded music for dancing.

It is now time to take a little trip.  Let us pretend we are traveling across the last bridge on Highway One to the island of Key West.  Our car radio is playing one of Jimmy Buffet’s most famous songs, “Margaritaville.”As we cross the bridge to Key West, we can see many boats.  Some are fishing boats you can use for the day.  Others belong to people who have sailed their boats here from many different places.

In the city, the houses are almost all painted white.  A few are pink or light blue.  Many houses are very old and very small.  Key West is a very old city.  Many of the buildings are more than 100 years old.

Many palm trees grow here.  Colorful flowers grow in front of many of the little houses. You can stay in a room in one of these houses for the night.  You can smell the ocean on the soft warm wind that blows across the island.

We drive past several streets and then come to Whitehead Street.  We turn left.  Very soon we come to the end of the street.  There is a monument here.  The sign says this is the southernmost part of the United States.  The sign says “American Begins Here.”  Beyond the sign is the ocean.

After taking a few photographs of the sign, we turn the car around and follow Whitehead Street to number nine-oh-seven.  This house belonged to the famous American writer Ernest Hemingway.  For a few dollars, you can see the inside of the house. Hemingway had many cats when he lived here.  He is gone, but the cats remain. Many are asleep on the beds or chairs.  They are used to seeing people walking through the old house.

After we leave the Hemingway house, we travel a little way to Green Street.  There is a private museum here we want to visit.  It is the Mel Fisher Maritime Heritage Society Museum.  The museum is named after treasure hunter Mel Fisher.  He discovered an old sunken Spanish treasure ship near Key West more than 20 years ago.

That ship was the Nuestra Senora de Atocha.  Visitors can see some of the ship’s treasure at the museum.  You can hold a huge, solid bar of gold worth many thousands of dollars.  You can put your hands through a hole in a clear, plastic box and hold the huge piece of gold. But the box is built so you can not turn the bar toward the hole.  You can not take the gold with you!

However, the museum store will sell you real Spanish coins that were found on the famous ship.  They are very costly.  Or you can buy a copy of a coin for much less money.

From Mel Fisher’s Museum, we walk the short distance to Mallory Square, the center of Key West’s historic area.  The square is famous for the Key West sunset celebration that is held each night if the weather is good.  It is really more famous for the unusual people and animals you can see here.  For example, you can see people sing or play music.  You can see cats perform tricks.  You can watch trained birds.  You can buy a hat.  Or just watch the beautiful sunset.

From Mallory Square we walk to Duval Street.  This is where we find many good eating and drinking places.  You can buy very good Cuban food. Cuba is only about 140 kilometers from Key West.  The Cuban influence can be strongly felt in the city.

Or maybe you want to eat seafood instead.  There are many good seafood restaurants. Singer Jimmy Buffet owns an eating place here, too.  It is the Margaritaville Café where you can get a good American cheeseburger.

You can also find drinking places that have bands.  Some bands play rock music. Some play music of the Caribbean.  Still others play country and western music.  There seems to be a kind of music for everyone.

There are many other businesses along Duval Street.  Many stores sell clothing. Some stores sell the works of local Key West artists. Duval Street is a lively area. There seems to be a party here until very late into the night.

There is much more to do and see in Key West.  You can take a high-speed boat trip for about an hour to the Dry Tortugas National Park.  A huge military fort was built there before the American Civil War.

You can rent an aircraft and take photographs of the beautiful Keys from the air.  You can learn to breathe under water using special equipment.  And, when your holiday is finished, you can drive slowly up Highway One, through the many other Florida Keys, stopping to enjoy each one on the way home.